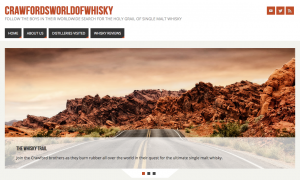 Crawfords World of Whiskey website was borne out of a love of different whiskys (or whiskeys) around the world. Starting out sampling their Scottish heritage father’s enjoyment of a “wee dram”, this grew further sampling whiskeys outside of Scotland which is the best known and is the biggest producer of Whiskey in the world, venturing into Ireland, USA and Japan. More recently tasting the whiskeys from South Africa, Australia, Taiwan, Spain and Sweden just to name a few. This passion they now want to share with all whisky connoisseurs .